The speed warning function can help you keep below a pre-set maximum speed.

The speed warning function will warn you if the vehicle exceeds the pre-set maximum speed. The system gives an audible warning signal if the set speed is exceeded by about 3 km/h. A warning symbol will also appear in the display . On some models the symbol may look slightly different.

With speed limit warning 1, the maximum speed can be changed while driving. The speed limit that has been set remains stored until the ignition is switched off, or until it is changed or cleared.

for speed limit warning 1 will appear in the display if you exceed the pre-set speed. It goes out again if the speed is reduced below the set speed limit.

The symbol also goes out if the speed is increased to more than about 40 km/h above the set speed for at least 10 seconds. This cancels the speed limit that was originally set.

for speed warning 2 will appear in the display if you exceed the pre-set speed. Unlike speed limit warning 1, the warning symbol only goes out once the road speed has dropped below the stored value again.

Please bear in mind that, even with the speed warning function, it is still important to keep a check on the car's speed with the speedometer and to observe the statutory speed limits.

You can use the SET button to set, alter or cancel speed limit warning 1. 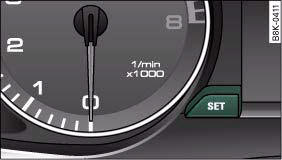 – Drive at the desired maximum speed.
– Press the SET button in the instrument cluster ⇒ fig. 22 for one second.

– Drive the vehicle at a minimum of 5 km/h.
– Press the SET button for at least 2 seconds.

lights up briefly in the display to confirm that the selected speed has been stored. The speed limit that has been set remains stored until another speed is set with a brief push of the button, or until the memory is cleared with a long push of the button.

When the speed limit has been cleared, the display will show a crossed-out warning symbol

You can use the sound system or MMI* to set, alter or cancel speed limit warning 2. 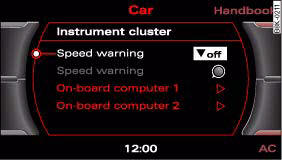