The driver can operate all the electric windows. 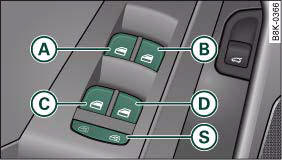 Detail of the driver's door: Controls

All electric windows have two-stage switches:

When the safety switch S, fig. 49 is pressed in, the symbol

in the switch lights up. The window switches in the rear doors are deactivated.

The windows can be operated for about ten minutes after the ignition has been switched off. The window switches are only deactivated when the driver's door or the front passenger's door is opened.

The convenience open/close function allows you to open and close the windows and the sun roof* with the remote control key.

You can select which windows are opened in the settings on the sound system or MMI*.

– Press and hold the unlocking button | on the remote control key until the windows have reached the desired position and the sun roof* is open.

– Touch and keep your hand in contact with the locking sensor on the door handle until the windows and the sun roof* are closed.

The driver can use the sound system or MMI* to select which windows are opened. 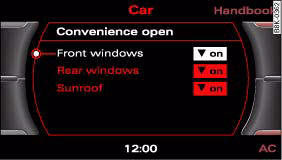 If you wish to use the convenience open function for the windows and the sun roof*, select on for the functions Front doors, Rear doors and Sun roof*.

What to do after a malfunction

The one-touch open and close function must be reactivated if the battery has been disconnected.

– Pull and hold the electric window switch until the window is fully closed.
– Release the switch and then pull it again for at least one second.