Starting the engine with the key 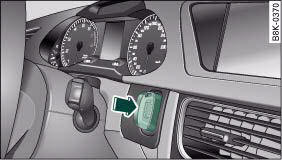 – Insert the key into the ignition lock.
– Manual gearbox: Press the clutch pedal all the way down and move the gear lever into neutral.
– Automatic gearbox: Press the brake pedal and move the selector lever to position P or N.
– Press in the key ⇒ fig. 130 to start the engine.
– Diesel engines can take a few seconds longer than usual to start on cold days. Please keep your foot on the clutch or brake pedal until the engine starts. The glow plug indicator lamp

lights up in the instrument cluster while the glow plugs are preheating.

If you press in the key without pressing the clutch or brake pedal, the ignition will be switched on or off. The steering lock is released when the ignition is switched on. Diesel engines continue to be automatically preheated.

The key can be removed only when the ignition is off. The key has to be pressed in briefly to switch off the ignition. On vehicles with an automatic gearbox, the selector lever has to be in position P.

Electrical components with a high power consumption are switched off temporarily while you start the engine.

When starting from cold the engine may be a little noisy for the first few seconds until oil pressure has built up in the hydraulic tappets. This is quite normal and no cause for concern.

If the engine fails to start immediately, the starter will be switched off automatically after a few seconds. Try to start the engine again.

This message appears on vehicles with an automatic gearbox if you try to start the engine without first pressing the brake pedal.

This message appears on vehicles with a manual gearbox if you try to start the engine without first pressing the clutch pedal.

This message will appear if you try to start the engine when the selector lever of the automatic gearbox is not in P or N.

Shift to P, otherwise vehicle can roll away. Doors do not lock if lever is not in P. or Please move selector lever to position P. Vehicle cannot be locked.

The steering is locked when the key is not in the ignition. The steering lock acts as a theft deterrent.

For the sake of the environment

Do not warm up the engine by running it with the car stationary. You should drive off immediately whenever possible. This will help avoid unnecessary exhaust emissions.

Switching off the engine

– Stop the vehicle.
– Automatic gearbox: Move the selector lever to position P or N.
– Press in the ignition key to switch off the engine.

After the engine is stopped the radiator fan may run on for up to 10 minutes, even if the ignition is switched off. The fan may also start running again after some time if the coolant temperature rises due to a build-up of heat, or if the engine is hot and the engine compartment is heated up further by direct sunlight.