The cruise control system allows you to drive at a constant speed of 30 km/h or higher. 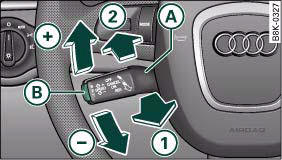 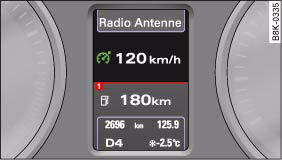 – Pull the lever A to position 1, fig. 134 to switch on the system.
– Drive at the speed you wish to set the system to.
– Press the button marked B to store the speed.

The display will indicate the stored speed, and the green symbol 1 will appear ⇒ fig. 135. The display can vary according to the display status. In addition, the indicator lamp 1 in the instrument cluster will light up.

A constant speed is maintained by adjusting the engine power or braking the vehicle accordingly.

– Push the lever A up towards + or down towards -, fig. 134 in order to increase or reduce the cruising speed setting.
– Release the lever to store the current cruising speed.

You can alter the set speed in steps of 1 km/h by briefly pressing the lever upwards or downwards. When you press and hold the lever, the speed is changed in steps of 10 km/h.

You can still use the accelerator pedal to increase speed in the normal way, for example to overtake another vehicle. Once you release the accelerator, the system will revert to the speed you stored initially.

However, if the vehicle exceeds the programmed speed by more than 10 km/h for more than 5 minutes, the cruise control system will be deactivated temporarily. The green symbol in the display will change to white but the stored speed will be retained.

You can pre-select a desired speed while the vehicle is stationary.

This function allows you to enter the desired cruise control setting speed ahead of time, for example before joining a motorway. Once you are on the motorway, you can activate the cruise control system by pulling the lever to position 1.

Switching off the cruise control system

– Press the brake pedal, or
– Manual gearbox: Press the clutch pedal for a relatively long period, or
– Push lever A to position 2(click stop not engaged), fig. 134, or
– Drive more than 10 km/h faster than the stored speed over a period of more than 5 minutes.

– Press the lever A to position 2 (click stop engaged), or
– Switch off the ignition.

The speed setting will remain stored after the system is temporarily deactivated. To resume the programmed cruising speed, release the clutch or brake pedal and pull the lever to position 1.

The stored speed will be deleted once the ignition is switched off.

Do not resume the programmed cruising speed if this is too high for the traffic conditions - this can cause accidents.