The gearbox selects the gear ratio and shifts up or down automatically according to the gear change programmes stored in the control unit.

Please note that on vehicles with a multitronic® gearbox, torque is transmitted via a multi-plate clutch, and not via a torque converter as on conventional automatics. This means that the car will not “creep” as much as conventional automatics when the engine is idling if you stop temporarily with the selector lever in position D, S or R.

The vehicle is equipped with an electronically controlled 6-speed automatic gearbox. The gearbox changes up and down automatically.

The gears are changed automatically. 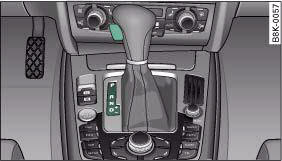 Detail of the centre console: Selector lever with interlock button

Driving away from a standstill

– Press and hold the brake pedal.
– Press and hold the interlock button (the button in the selector lever handle), move the selector lever to the desired position, for instance D, and release the interlock button.
– Wait for the gearbox to engage the gear (a slight movement can be felt).
– Release the brake and press the accelerator ⇒

– Apply the foot brake to hold the vehicle when stationary (for instance at traffic lights).
– To prevent the vehicle from rolling away, apply the parking brake before moving off on steep gradients ⇒

.
 – As soon as you accelerate as normal, the parking brake will automatically be released and the vehicle will start moving.

The engine can only be started when the selector lever is at P or N.

Vehicles with multitronic® gearbox: Your vehicle is equipped with the hill hold assist function which makes it easier to drive away on a slope. The system is activated when you press and hold the brake pedal for a few seconds. When you release the brake pedal the braking force will be maintained for a moment in order to prevent the vehicle rolling back when you drive away.

This section covers all the selector lever positions. 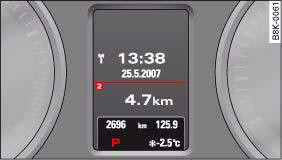 The current selector lever position is shown in the instrument cluster display.

This locks the driving wheels mechanically. The parking lock must only be engaged when the vehicle is stationary ⇒

When reverse gear is engaged the gearbox automatically selects the lowest gear ratio.

To move the selector lever to position R, press in the interlock button and at the same time press the brake pedal. Depending on the model, one or two reversing lights will come on in selector lever position R (when ignition is switched on).

In this position the gearbox is in neutral ⇒

In this position the gearbox automatically selects the best gear ratio. This depends on the engine load, the road speed and the dynamic gear control program (DCP).

In some situations (such as on mountain roads or when towing a trailer or caravan) it can be advantageous to switch temporarily to tiptronic mode, so that the gear ratios can be selected manually to suit the driving conditions.

Select this position if you wish to take full advantage of the car's performance. This setting makes use of the engine's maximum power output. When accelerating the gear shifts will be noticeable. Press the brake pedal when moving the selector lever from N to S if the vehicle is stationary or at speeds below 5 km/h ⇒

You can select the sport program for gear changes on vehicles with Audi drive select* by activating the DYNAMIC mode. There is no S position on the selector lever.

The selector lever lock prevents gears from being engaged inadvertently, so that the vehicle is not set in motion unintentionally. 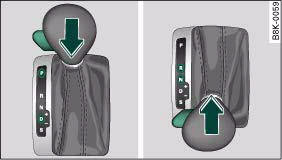 The selector lever lock is released as follows:

– Switch on the ignition.
– Press the brake pedal and at the same time press in the interlock button.

The selector lever is locked in the P and N positions when the ignition is on. The brake pedal must be depressed before the lever can be moved out of either of these positions. The following message appears in the instrument display as a reminder for the driver when the selector lever is in position P or N:

The kick-down feature is designed to give maximum acceleration.

When the accelerator pedal is pressed right down past the point of resistance at full throttle, the gearbox will select a lower gear ratio, depending on road speed and engine speed. While you keep the accelerator depressed the engine speed is automatically controlled to give your vehicle maximum acceleration.

When the accelerator pedal is pressed right down past the point of resistance at full throttle, the gearbox will shift down to a lower gear, depending on road speed and engine speed. The upshift to the next higher gear is delayed until the engine reaches maximum rpm.

Please note that if the road surface is slippery or wet, the kickdown feature could cause the driving wheels to spin, which could result in skidding.

The automatic gearbox is controlled electronically.

The vehicle is equipped with an electronically controlled gearbox. The gear ratios are selected automatically according to preset gearshift programmes.

When you drive at moderate speeds the gearbox will select the most economical shift programme. It will then change up early and delay the downshifts to give better fuel economy.

If you drive at higher speeds with heavy acceleration, if you open the throttle quickly, or if you use the kick-down or the car's maximum speed, the gearbox will automatically select the more “sporty” shift programmes.

The gearbox is self-adapting, and continuously selects the most suitable shift programme. At the same time, the driver can also make the gearbox switch to a more "sporty" programme by pressing the accelerator quickly. Depending on road speed, this makes the gearbox shift down early into a lower gear ratio for more rapid acceleration (for instance to pass another vehicle), without having to press the accelerator all the way down into the kick-down position. After the gearbox has shifted back up it returns to the original programme, depending on your style of driving.

With the manual shift programme (tiptronic) the driver can manually select pre-programmed gears. 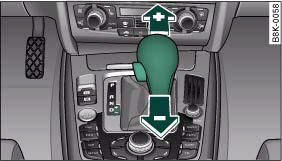 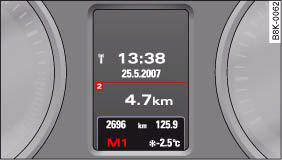 Switching over to the manual programme

– From position D, push the selector lever to the right. As soon as the automatic gearbox has changed over to this programme, the display will show the selected gear.

Shifting up a gear

Shifting down a gear

– Briefly pull the selector lever backwards (in the tiptronic gate) -.

With the tiptronic system the driver can manually choose between 7 different pre-programmed gears. The manual programme can be selected either with the vehicle stationary or on the move.

When accelerating, the gearbox automatically shifts up into the next gear shortly before the maximum engine speed is reached.

If you select a gear which is lower than the gear shown in the instrument display ⇒ page 166, fig. 181, the gearbox will only shift down when there is no longer a risk of overrevving the engine.

When the vehicle slows down (for instance when braking), the gearbox automatically shifts down into the next gear when the minimum engine speed is reached.

Changing down to a lower gear increases the engine braking effect on downhill gradients.

When the accelerator pedal is pressed right down past the point of resistance at full throttle, the gearbox will select a lower gear, depending on road speed and engine speed.

A back-up system is in place should a fault occur in the control system.

The automatic gearbox switches to the back-up programme if a fault should occur in the control system. This is indicated by all segments of the display panel either lighting up together or going out completely.

It is still possible to move the selector lever to all positions. The manual shift programme (tiptronic) is not available when the backup programme is active.

It will still be possible to use reverse gear in the normal way. However, the electronic lock for reverse gear will be switched off.

Should the gearbox ever switch into the back-up programme, you should take the vehicle to an Audi dealer or qualified workshop as soon as possible.

The paddle levers on the steering wheel enable the driver to manually select pre-programmed ratios or gears. 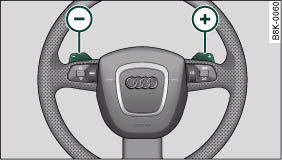 The selector lever can be released manually if the electrical power supply should fail. 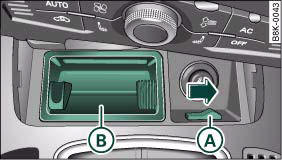 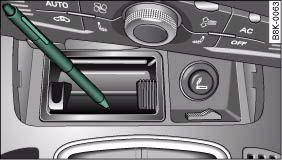 The manual release mechanism is behind the ashtray.

The selector lever can only be moved out of position P if the ignition key is inserted and the ignition is switched on. If the power supply should ever fail (discharged battery, etc.) and the vehicle has to be pushed or towed, the selector lever must first be moved to position N. This is possible after operating the manual release mechanism.