The HomeLink universal transmitter can be programmed to replace the hand-held controls of devices already in use.

HomeLink allows you to conveniently activate garage doors, estate gates, security systems, home or office lighting and other electric devices by means of control buttons inside your car.

HomeLink can replace up to three hand-held transmitters operating existing devices on your property with a single universal transmitter. This will be possible for most transmitters which control the drive units for a garage door or external gates, etc. You can programme the individual hand-held transmitters for your remote control at or near the centre of the radiator grille. This is where the control unit is located.

To be able to control systems with HomeLink, you need to perform initial programming on the HomeLink transmitter first. If systems fail to respond after the initial programming, check whether these systems work with a "rolling code" (variable security code).

When you are programming the HomeLink universal transmitter, make sure that no persons or objects are close to the devices receiving the transmitter signals. If a gate or door is inadvertently set into motion during programming, persons might be injured or other damage caused by moving parts.

The HomeLink unit is programmed at the radiator grille. 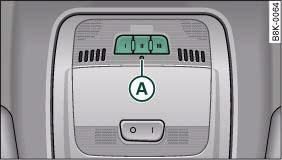 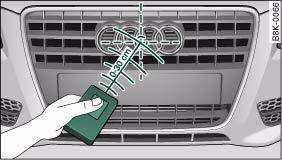 At the operating unit

1. Switch on the ignition (do not start the engine).
2. Press and hold down the two outer HomeLink buttons, fig. 197 until the indicator diode A, fig. 197 begins to flash after about 20 seconds. This procedure will delete the standard factory settings and does not need to be repeated when programming the other buttons.
3. Press the particular HomeLink button which you would like to program.
4. Wait until the diode A begins to flash. The HomeLink module now remains in training mode for 5 minutes.
5. Now step in front of your vehicle with the original handheld transmitter for the garage door opener or any other device you wish to assign to the HomeLink control button.

The proper distance between the hand-held transmitter and the HomeLink module at the radiator grille depends on the system you want to train. It may require several attempts.

The turn signals will flash once if the time limit for the programming mode has been exceeded. In this case the programming procedure needs to be performed again. Repeat the sequence at the operating unit starting with step 3.

The programming instructions above also apply to the other control buttons. Start with step 3 if you wish to proceed and program the other two buttons.

If the garage door or other devices still fail to be activated with the HomeLink control buttons after programming is completed, it is possible that these systems might be working with a rolling code instead of the normal fixed security code. If this is the case, a rolling code programming is required in addition to the steps described above.

– Press the already programmed HomeLink button again and hold it down.
– Watch HomeLink diode A, fig. 197. If the diode starts flashing rapidly and turns into a constant light after about 2 seconds, this indicates that the device you wish to operate (e.g. a garage door opener) is equipped with a rolling code.
– Program the rolling code as follows:

Programming at the operating unit in the headliner

After programming at the operating unit in the headliner, the garage door opener should recognize the HomeLink signal and respond when the HomeLink button is pressed. Now the other control buttons can be programmed as required.

The programmed devices are activated by means of the HomeLink control buttons in the headliner.

– Make sure that the ignition is on.
– Press the programmed HomeLink button, fig. 197. The device assigned to that button (e.g. garage door) will be activated.

The HomeLink indicator diode, fig. 197 will light up when you press the button.

You can erase the complete HomeLink programming by pressing the two outer buttons.

– Switch on the ignition (do not start the engine).
– Press and hold down the two outer buttons until the indicator diode starts to flash, fig. 197.
– Then release the buttons.

After the programming of the HomeLink buttons has been erased, the system will return to the training mode and is ready to be reprogrammed at any time.

A HomeLink button can be re-programmed individually without affecting the other button allocations.

At the operating unit in the headliner

– Press and hold down the selected button until the indicator diode, fig. 197 starts flashing slowly.

When the turn signals have flashed three times, this means the device previously stored in HomeLink has been erased and the new system programmed in its place. To activate the new system, press the HomeLink button that has just been re-programmed.

It may require several attempts before programming is successful. When programming a new device, keep the button pressed for at least 15 seconds before trying again with the transmitter in a different position. Keep watching the turn signals during that time. 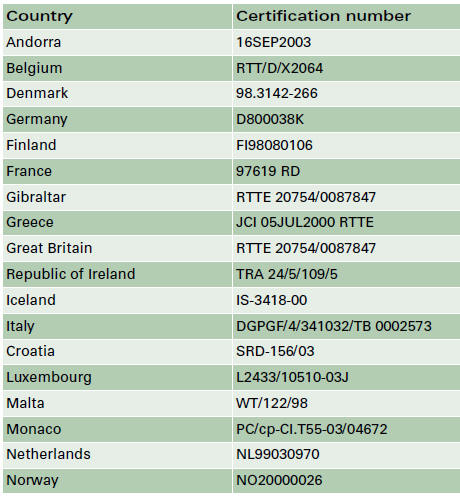 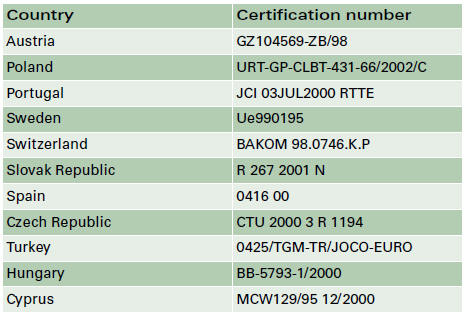